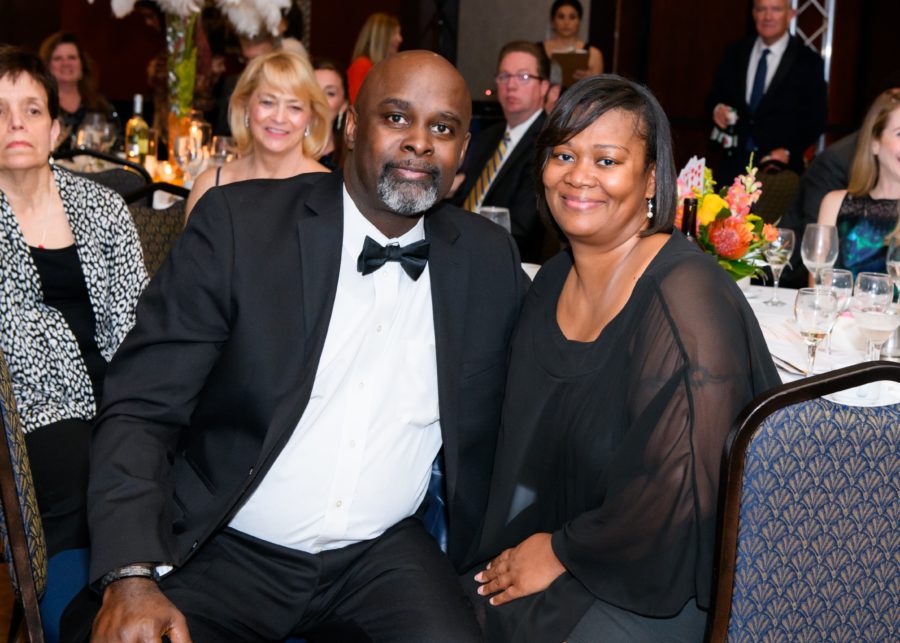 Mpower families like Lavette and Dwayne’s at our DuPage Gala! Learn more and support at www.metrofamily.org/DuPageGala

“I MADE A DECISION TO BE OPEN AND HONEST ABOUT EVERYTHING”

On Lavette’s first visit to Metropolitan DuPage, she asked her clinician, Julia, about how confident she was in helping her son, Devin.

“She looked me straight in the eye and said, ‘very confident,’” Lavette remembers. “I made a decision to be open and honest about everything. I was desperate and we as a family were in a crisis!”

When Lavette and her husband, Dwayne, took in two foster children, Tamia and Devin, “our hearts were instantly filled with so much love and joy,” she says. “But I began to quickly see this was not going to be what I pictured.” Tamia, now ten years old but then only two, was unable to speak due to previous trauma she’d experienced and poor physical growth as an infant. Devin, then nine months old, immediately showed signs of a trauma disorder.

Over the next eight years, Lavette and Dwayne encountered challenges in understanding Devin’s condition and finding the services both their children needed. “I immediately asked questions, many of which went unanswered,” Lavette says. “But I kept on fighting tooth and nail for services, to the point where I irritated many souls!” She remembers people telling her, “You act as if these are your children,” and her reply was always, “They are!”

Given a long waiting list for Medicaid recipients to receive mental health services in Chicago, Lavette was unable to place Devin in therapy for years. “Devin suffered hard,” she says, and he still didn’t have a diagnosis. “It wasn’t until we allowed our hearts to break and make the decision to admit Devin into the hospital due to suicidal thoughts,” Lavette says, that Devin was diagnosed with ADHD, ODD (Oppositional Defiant Disorder) and Trauma Disorder. Doctors prescribed medication and sent Devin back to school, but he was still on the waiting list for therapy in Chicago.

At that point, Lavette and Dwayne “made a faith move” to DuPage County, which had no wait list for therapy services. Therapy began to help immediately. “His behavior in school improved! His behavior at home improved!” Lavette says.

Yet challenges still abounded; the medication left him very flat, adjustments to his medication helped little, and Devin was still having suicidal thoughts. Amidst further hospitalization and evaluation, the family learned Devin was being bullied at school, and struggling to process his feelings and questions regarding his biological mother.

“As a parent, it hurt my soul,” Lavette says.

Then she remembered Metropolitan Family Services. She knew of our Southwest Center, Devin having received counseling at our Blue Island site, but it wasn’t until she saw a story on Adoption Support and Preservation that she says her heart dropped. “It was as if they were talking about Devin,” she says.

“Ms. Julia was an angel in disguise,” Lavette shares. “Ms. Julia created a space of trust with us. We felt safe to bare our soul and that we did. Each session allowed us to see that we all needed counseling in order for this to work. I saw our family changing for the better. I saw growth! I began to hope, wish, want and dream.”

Julia also valued the level of trust she shared with the family, which she says started with Lavette and Dwayne’s level of involvement. “Their willingness to fully participate in family sessions and their trust in me from the start set such a strong example for Devin and Tamia that it was okay to participate and it was okay to trust me,” she says. “Because the trust is there, we are able to talk more openly about each child’s adoption journey, filling in a lot of blanks that were causing them stress and anxiety.”

Positive changes followed. Lavette and Dwayne sought their own counseling outside family sessions through the Adoption Support and Preservation program, showing the kids extra support is a good thing. At a parenting support group, Lavette says, “I am able to cry and get advice from other parents like me!”

“Lavette grew as an advocate for Devin’s needs when they transitioned to their new school,” Julia says, seeking additional training and information on her own. “She participates in the parent support groups and the group facilitator says she is valued as a member of the group.” Lavette shares that the time she spent on finding services for Devin and Tamia led her to becoming a social worker.

“We saw our kids laugh, express joy and happiness not only at home but at their new school,” Lavette adds. “It’s been almost a year and no hospitalization for Devin!” Tamia, not only healthy and talking, placed into a gifted program at school.

Julia shares, “Although we have faced challenges with Devin throughout this year, we are seeing significant progress and it has been an overall joy to get to know and work with this wonderful and inspiring family.”

“We are learning and using the tools Ms. Julia taught us,” Lavette says. “Is it perfect? Not at all! But with our faith in God, the help of Ms. Julia, and Metropolitan Family Services we are hopeful!”

Lavette recently shared her family’s story at the 18th Annual DuPage Gala, which raises funds and awareness for Metropolitan Family Services DuPage. The photo above is of Lavette and Dwayne at the Gala.