Prior to joining the agency Nava was Chief Small Business Officer for the City of Chicago, where she helped to support and grow more than 70,000 small businesses. In that role she also helped create the City’s Neighborhood Small Business Strategy, which worked with 90 chambers of commerce to provide services to small businesses and launch programs that helped businesses access more than $8 million of affordable capital. Nava’s prior roles include serving as Director of the State of Illinois Division of Financial Institutions, Assistant Director for the Illinois Department of Commerce and Economic Opportunity, and Vice President with The Northern Trust Company.

Nava earned a Bachelor of Science Degree in Finance from DePaul University and an MBA from National Louis University. 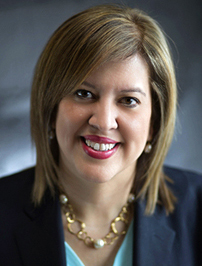