Metropolitan and the Chicago mayoral race

“It is important for Chicagoans to vote their voice as it is a step in the right direction to restoring community in communities.”
– Vanessa Dereef, Metropolitan Peace Academy Training Manager

Her question to the candidates focused on violence prevention:

“In a tale of two cities, our youngest Chicago residents are plagued with daily traumatic experiences, including but not limited to, neighborhood shootings, inadequate school resources, a dismantled family structure, etc. In an effort to provide a solutions-based and proactive approach to our city’s violence, if elected mayor, can we count on you to invest in an Office of Violence Prevention that would be advised by a council of affected Chicagoans? Can we also depend on you to make this a top priority of your administration?”

Vanessa’s thoughts on the response from Preckwinkle and Lightfoot: “The candidates’ answers left me intrigued and I would like to discuss the matter further with our mayor elect.”

Vanessa shares, “The entire experience was awesome from beginning to end. Meeting the candidates, ABC7 reporters, and represented communities was indeed an unexpected treat, I am humbled by the experience. “ 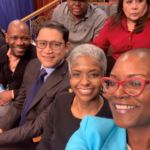 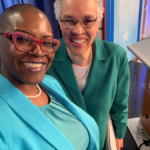 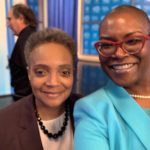 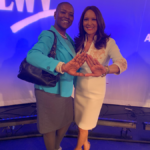 Earlier in the week, Metropolitan had another opportunity to engage with the mayoral race.

inVEST Chicago & 100 Black Men of Chicago presented “Communities Striving for Peace and Prosperity,” a mayoral candidates’ forum focused on gun violence and economic prosperity. Metropolitan served as a co-host of the event, and a few of our staff including our CEO, Ric Estrada, attended. Staff at our General Office were able to see the panel as well; we held a watch party to watch the live stream.

View the full panel below! (Keep an ear out at 1:04, when candidate Lori Lightfoot mentions Ric as one of the leaders of organizations working toward long-term solutions to violence in the city.) 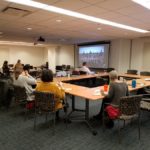 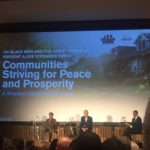 We love to see these Playful Learning activities out in our communities! Thank you Hesed House, and we hope your kiddos enjoy learning and playing.