“The first thing I want to say is thank you.” Metropolitan Peace Academy graduates its second cohort

“The first thing I want to say is thank you. I know firsthand the struggle of changing your life and then reaching back to change others, so I thank you.”

In his keynote remarks at the Metropolitan Peace Academy’s Cohort Two Graduation, Chico Tillmon, YMCA of Metropolitan Chicago’s Executive Director of Youth Safety and Violence Prevention, emphasized his message of thanks above all else.

The 24 street outreach workers of Cohort Two spent 144 hours over 18 weeks learning best practices in violence prevention, as part of the Peace Academy’s goal to professionalize the field of street outreach. At the recent graduation ceremony, they celebrated their achievements alongside their families and supporters of the Peace Academy at the South Shore Cultural Center.

Learn more about the Metropolitan Peace Academy and its role in Communities Partnering 4 Peace (CP4P).

In Chico’s thanks to the graduates, he spoke about the incredible commitment his “brothers and sisters” in street outreach work make, both in putting their lives on the line to make life better for those around them, and in working to better themselves through their involvement with the Peace Academy. He praised the unique skills and strong mindsets of those “who see the world being better than what it really is.”

“The first thing I ask you is to continue in excellence, because people need to see examples like me and you to know it’s possible,” he said. “Who’d ever thought I could do twenty years in prison and come out and be standing here talking about peace?”

View an excerpt from Chico’s remarks:

Several members of Cohort Two shared their own reflections from their experience in the Peace Academy.

“I believe together we will move now with intentionality toward the healing of our communities,” said Juanita Pye, a graduate from the YMCA of Metro Chicago.

“We bump heads, doing the work we do,” said Charles Jones, a graduate from Target Area DevCorp. “We get on each other’s nerves, but then at the end of it all we’re brothers.”

Charles spoke about the importance of professionalizing the field. “I’ve been in the trenches,” he said, reluctant at first to let someone teach him about work he’s already been doing. But in the Peace Academy, he says, “you have to be open to learning new things. While street outreach workers bring “skills you can’t really learn overnight” to the Academy, he says, “you have to learn to develop a professional attitude because we are professionals.”

Andre Rodriguez of New Life Centers shared his appreciation for his classmates, and the importance of mutual respect. “The problem is so big, and we’re just out here trying our best, sometimes you feel a little bit overwhelmed,” he said. “But to see there’s other people out here fighting with you … it puts a little more juice in your battery.”

Training Manager Vanessa Dereef and Training Assistant Rodney Phillips – a Cohort One graduate – handed out special recognition awards. Dr. Troy Harden of Northeastern Illinois University, who helped create the Metropolitan Peace Academy curriculum, joined them on stage to present each graduate with his or her graduation plaque. 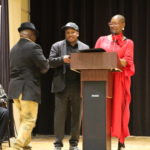 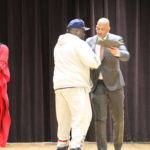 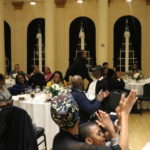 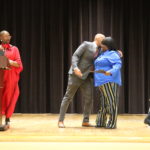 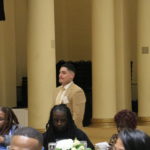 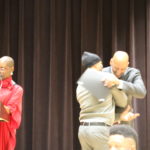 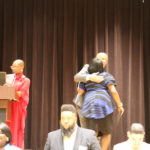 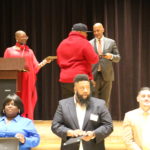 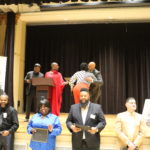 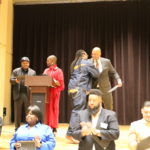 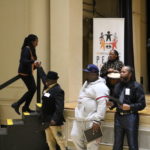 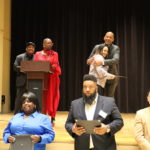 Metropolitan CEO Ric Estrada, asking each of the graduates to stand and be recognized, shared several statistics showing that since the beginning of CP4P, neighborhood violence has decreased in the communities where these outreach workers are operating.

“We’re building an ecosystem of people who care about this,” Ric said. “They’re our outreach workers who are going to help us stop the violence.”

View all the event photos